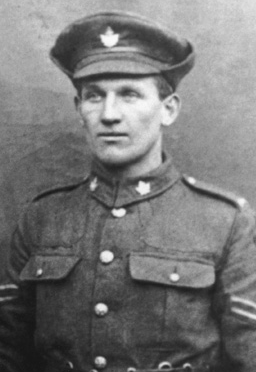 Lance-Sergeant Ellis Sifton of the 18th Battalion: During the attack in enemy trenches Sgt. Sifton’s company was held up by machine gun fire. Having located the gun he charged it single-handed, killing all the crew. A small enemy party advanced down the trench, but he succeeded keeping these off till our men had gained the position. In carrying out this gallant act he was killed, but his conspicuous valour undoubtedly saved many lives and contributed largely to the success of the operation. Sifton is buried in the Lichfield Crater Cemetery near Neuville-Saint-Vaast, France.