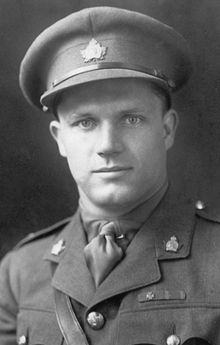 Captain Thain MacDowell of the 38th Battalion: On April 9, Captain MacDowell, with the assistance of two runners (company orderlies, Privates James T. Kobus and Arthur James Hay, both of whom were awarded the Distinguished Conduct Medal for their part) reached the German position ahead of his company. After destroying one machine-gun nest he chased the crew from another. MacDowell then spotted one German going into a tunnel. At the base of the tunnel, MacDowell was able to bluff the Germans to think he was part of a much larger force, resulting in the surrendering of two German officers and 75 German soldiers. He sent the prisoners up out the tunnel in groups of 12 so that Kobus and Hay could take them back to the Canadian line. Although wounded in the hand, MacDowell continued for five days to hold the position gained, in spite of heavy shellfire, until eventually relieved by his battalion. He was the only Victoria Cross recipient to survive the war. He died on March 29, 1960 and is buried in the Oakland Cemetery in Brockville, ON.