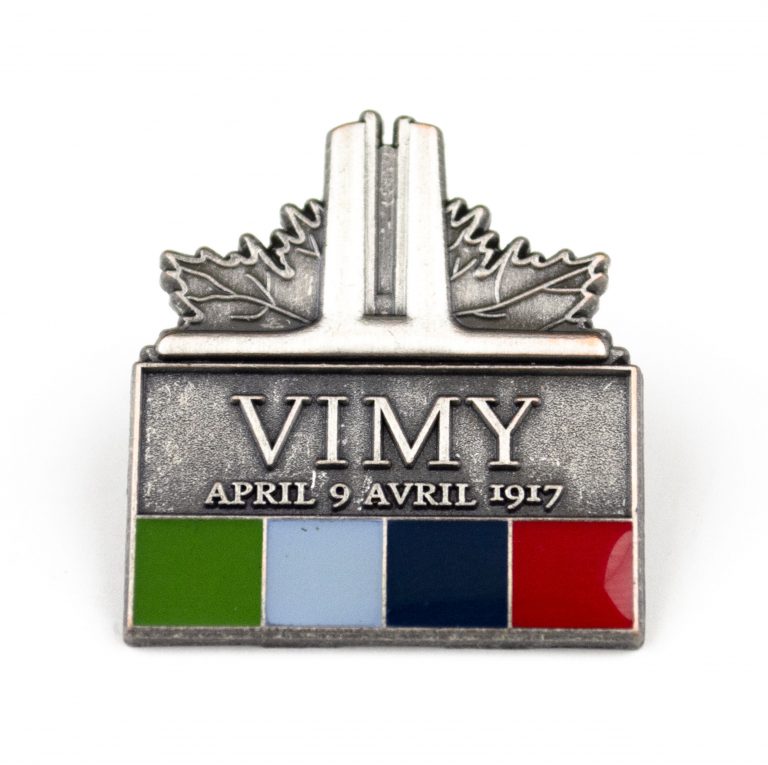 No items found.
This product is out of stock.
Product is not available in this quantity.

The Vimy Pin was introduced in February 2009. Spearheaded by Christopher Sweeney, member of the Vimy Board of Directors, the pin has been described as “April’s Poppy” by the National Post newspaper. It is the Foundation’s goal that people wear the pin every Vimy Ridge Day in remembrance of that outstanding victory on April 9, 1917, and in recognition of that event’s contribution to the Canadian identity. The four coloured boxes represent the four Canadian divisions which fought together for the first time on April 9, 1917 at the Battle of Vimy Ridge. The red represents the First Division, the dark blue the Second Division, the grey-blue the Third Division, and the green the Fourth Division. The order of the ribbon’s colours (left to right) reflects the positioning of the four Canadian Divisions facing the German defences on the day of the battle. On the top of the clasp is an elongated Canadian maple leaf, which has been used as a Canadian symbol since the early 1700s. Within the maple left are the iconic two towers of the magnificent Vimy Memorial designed by Walter S. Allward, built between 1925 and 1936 by the Canadian Government on land given to the nation by France to honour Canada’s First World War sacrifice of 60,000 dead

Check out our products in our shop